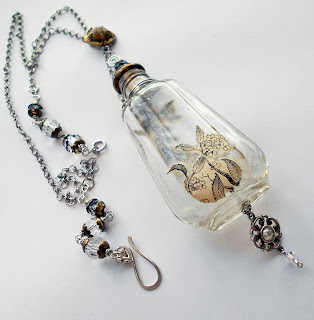 The last piece I will ever make -- in 2013.  I've been thinking about the seriousness of resolutions, how they are actually promises you make to yourself, and so have decided a good resolution needs a reliquary, a place to honor it and keep it close. So I made one from an old bottle, found buried in a house lot in Sedro Woolley, Washington.  It is marked "FF" in a circle, which identifies it as made by Foster Forbes Class Co., probably around 1942.  It has the beginnings of iridescence here and there, and it had no top.  I made a stopper from a crystal bead, rhinestone spacers, copper tubing and paper torn from a 1880s schoolbook, which was also the source of the pretty floral line art used to collage the front and back. The bottle was drilled to add a rhinestone fob salvaged from broken earrings, and then suspended on salvaged chain from an antique button.  It was then finished with more of the salvaged chain, spliced to six crystal beads, also salvaged, and a pretty hook to close. The stopper can be removed to insert the resolution represented as a written word, or another symbol of your promise to yourself for the New Year. It will soon be listed in my Etsy shop. 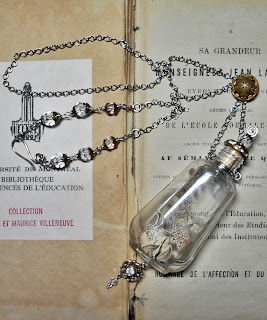 Posted by betweenreader at 5:59 PM No comments:

My favorite comes first.  With Peter O'Toole's passing, we need to say goodbye, and fondly thank him for his gift.  There's a perfect movie for that:  "Dean Spanley."  It's a New Zealand jewel, based on Lord Dunsany's short novel, My Talks With Dean Spanley.  Sam Neill plays the Dean, a delightful performance, and the central gem of the piece, but Peter O'Toole shines even brighter. It's about reincarnation, and it's about dogs, so what's not to love?

Next, a film from Russia, historical, fascinating for the sets, costumes and ravishing portrayal of court life among the descendants of Genghis Khan,"The Horde."  As long as you are wanting a bit of delicious escapism, why not really, really escape, far, far away?

And, a third, another Russian work, "The Russian Ark," filmed on location in the Hermitage -- a bit like being invisible passing unseen through moments of history, and among the fabulous treasures of that great assembly of the greatest art. In one scene, you can see the reflection of light shining off the surface of a Reubens, so finely painted the texture is more of canvas than brush strokes, and in another, a glittering Romanov ball scene with a huge cast in the finest formal court dress dancing the mazurka, in the waning days of the Winter Palace.

A feast for your eyes and imagination; bon appetit, and happy holidays!
Posted by betweenreader at 8:58 PM No comments:

Floods of Stone and Ice

Friend Jena and I made a timely escape from the gloomy weather on the west side of the passes, over east, to the Columbia basin, to an area geologists call "The Channeled Scablands." It's a fabulous landscape, created by ancient floods released from continental glaciers in Pleistocene times. But that's not the whole story -- long before the glaciers began to melt, even long before the glaciers, in Miocene times. great lava flows flooded the area over a period of thousands of years, thousands of feet deep.  When the glacial floods came blasting through, hundreds of feet deep, armed with boulders and grit traveling at highway speed, the lava was scoured and sculpted into a regional-scale picture of drainage patterns. 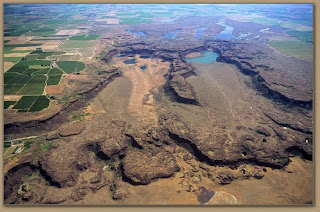 Our hike covered five miles of trail in the Ancient and Dusty Lakes area, near Quincy, Washington, rambling through two embayments of scoured lava cliffs, over a frosty sagebrush steppe ecosystem, under bright skies in blustering northerlies, that kept us moving briskly, but not too fast to enjoy our glorious surroundings. 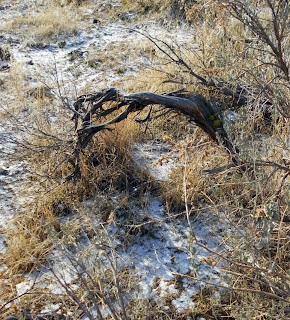 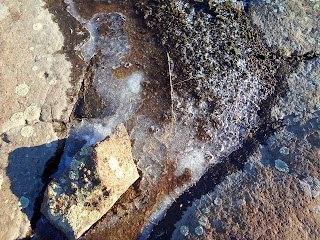 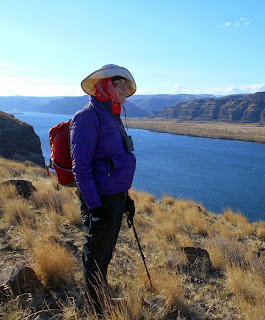 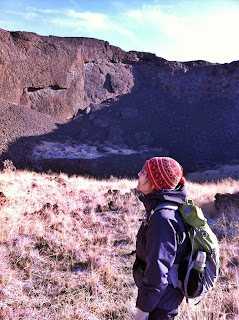 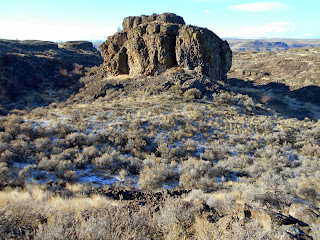 A closeup view of carved lava

Going east for a day-long dose of sunlight is the best way to make up for the short, dark days before winter solstice.  Today, sunrise was at 7:51 am.  Sunset will be at 4:18.  'Scuse me while I take my Vitamin D.
Posted by betweenreader at 9:28 AM No comments:

Please respect my copyright and don't use my text or images without my express permission.